You may have noticed recently a new site design both here and over on the main part of our website. It’s been long overdue, if I’m honest, and probably ended up taking me (yes me!) slightly longer than I wanted.
Originally (about 12 months ago!) I decided we needed a new site, something a bit more modern – so off I went and started a redesign, only to come to a halt because of lack of time – I was spending my days in the workshop and evenings on my computer sorting the site out. 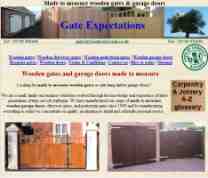 After much persuasion from my dad (The Boss-man), we out-sourced (sounds technical, but we got a few prices from web-designers and picked a decent sounding one!) and we were let down. We were onto our third web-designer, and looking good for the site to be finished just before Christmas, only to be let down again as the designer had taken too much work on. So back to square one and finishing what I originally started in February 2012 (sounds ages ago now). As I say it should have been finished a lot quicker but I was having problems with 404 errors (Ted Westie decided to help out with these) that seemed to mock me whatever I did, after much investigation it turns out I had a plug-in problem!

Our site over the years

We’ve been online originally since about 1999, with a free hosting account as part of our internet provider’s service. In our current form, at www.woodworkersuk.co.uk we’ve been here since 2002, originally with just a three page ‘business card’ style site. It was only when I wanted more pages adding to the website (and found the cost £8000 a year plus vat no less – ouch!) that I dived in and got my hands dirty with the code – the company responsible laughed at me when I said I would do it myself and promised they would ring back three months later and I would be begging them to take back the reins of the website (Still waiting for that phone call 10 years later!).

Thank you, thank you very much!

As I’ve mentioned, I ended up finishing the site myself; as is the case when you’re doing something that you’re not an expert at, I got stuck a few times. After firing Google (have you noticed how we ‘Google’ stuff these day? We never used to ‘Yahoo’ or ‘Alta Vista’ stuff back in the day!) up and searching for answers, in many cases, I came up with two opposing answers so I was stumped. I’d just like to say thanks to the following people who were kind enough to lend an ear to a frustrated joiner seeking advice:
Paddy Moogan (He’s got a book so go and buy it – well, at least go and have a look, you won’t be disappointed!), James Agate (he likes Curly Wurlys!) and Chris Gilchrist (who is Scottish and more than likely wears a kilt – he may or may not do, I have no idea really, as it would seem a bit weird of me to ask for a picture!), who was kind enough to have a look at a WordPress issue for me and also write a plug-in for us!
Also, thank you to my long-suffering wife (and also the punctuation queen!), Sarah, who has lived every single moment of this journey (and has the scars!) along the way…
Although the site is now live, I’m still tweaking things (oh er Matron!) and fiddling with the layout – if you happen to be nosing around and spot any errors or bugs, then please get in touch using the comment form below, or drop us an email!