Joinery grade softwood – what is it?

We’re getting more and more people asking for Joinery Grade Softwood at the moment so we thought we’d do a little blog post to tell you a bit more about the timber we use in our softwood gates and doors, as well as exactly what Joinery Grade Softwood means, as it can be a bit ambiguous, and in the case of Unsorted Softwood, a bit of a strange term unless you know why it’s called Unsorted Softwood.

Well, to start with, we use Unsorted Scandinavian Redwood in our Softwood products, preferably Swedish Redwood as we feel it is of a far higher quality than either the Russian or Finnish equivalents, which can be quite knotty at times. 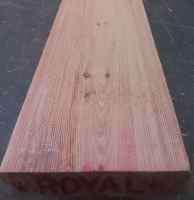 What is joinery grade softwood?

The name ‘Joinery Grade Softwoods’ is a bit vague as it covers several different grades of Softwood. So, we use ‘Unsorted Softwood‘ in our products; this is not a mish-mash of quality however, despite its name, implying that is hasn’t been sorted; well it hasn’t, but it, erm, it has, if you see what we mean!

Unsorted – but it’s sort of been sorted – softwood?!

You’ve got three main grades of Joinery Grade Softwood and they are:

This is the best Joinery Grade Softwood and it contains a mix of Firsts, Seconds, Thirds and Fourths. This is free from waney edges and large knots. It contains less knots than Fifths.

The picture (above right) shows a piece of 9″ x 2″ (approx 225mm x 50mm) Unsorted Softwood, so you get an idea of the size of the knots present; having said that, this is a exceptionally good example of Unsorted Softwood and it’s not unusual for some larger knots to be present.

The next grade down basically contains larger knots than unsorted timber and has more of them. Typically, if you pick up any timber from your local DIY store, then it will more than likely be Fifths.

This is the lowest joinery grade; it has a lot more knots than both Unsorted and Fifths Softwood and the knots that are present are larger than what is acceptable for either Unsorted or Fifths softwood.

How is Unsorted Softwood sorted?

Basically, you start off with a stack of timber and it is visually sorted through, removing the timber that forms the Sixths Softwood (the worst of the timber) to a new stack and then by removing the Fifths to another new stack. This then leaves the remainder of the timber as having not been sorted, hence the name ‘Unsorted’. 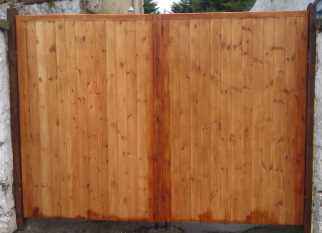 An example of a gate made from Fifths Softwood (not one of our gates!)! 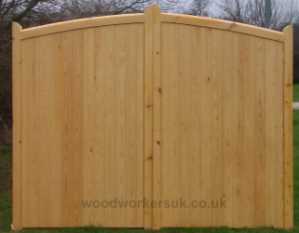 One of our Curved headed driveway gates in Unsorted Softwood – notice the lesser amount of knots?

But knots in timber don’t make a difference?

They do! If the knot within the timber is large and goes across the complete face and/or edge of a piece of timber, then it interferes with the grain, potentially reducing the strength of the timber (long grain is strong, short grain is weak – we’ll come to that in another blog post I think!). This is generally why Sixths is used for things like dado rails and the Unsorted is used for things like doors, gates and windows as it has more strength, especially where joints are involved.

This is not really an official grade of Softwood; some companies offer Centre free Softwood which means the younger part (newer growth) of the tree is present (this is the ‘Pith’ or ‘heart’, shown left as the larger dark brown stripe up the timber). In truth, however, we’ve found that this unofficial grade of Softwood can be quite poor, as although the Centre is not present (and that’s open to debate in some cases) the knot content and size of knots lets the timber down. In almost all cases, you’ll find very little ‘Centre’ present in our products as the majority is cut out as we make our gates and doors.

An example of ‘Centre’ or ‘Pith’ in Softwood

All the grades listed above are visual grading for Softwood. To confuse matters slightly more, there are structural grades for strength when the timber is used in things like joisting, purlins and rafters. For more information on the structural grading of timber, please see Dry graded structural softwood (link opens in new window).

or email a question to enquiries@woodworkersuk.co.uk

Facebook Twitter Email Pinterest linkedin
There are a wide range of different types of wooden gates on the market: hardwood or softwood gates, ledged gates, morticed and tenon...

END_OF_DOCUMENT_TOKEN_TO_BE_REPLACED

Explanation of terminology used in Joinery and Carpentry

We’ve put together a glossary of commonly used Carpentry & Joinery terms. Some of the terms have a couple of different meanings and some you will be familiar with and some maybe not so. Due to the sheer amount of Carpentry and Joinery terms, we will spread it over a couple of posts so we can include as many as possible.We begin with A-B