We’ve put together a glossary of commonly used Carpentry & Joinery terms. Some of the woodworking terms have a couple of different meanings and some you will be familiar with and some maybe not so. Due to the sheer amount of Carpentry and Joinery terms, we will spread it over a couple of posts so we can include as many as possible.We begin with A-B

Accoya
Accoya is a modified timber product that has had it’s chemical structure altered by way of wood acetylation. Acetylation refers to the process of reacting the timber with acetic anhydride, once the timber has undergone this process, the timbers ability to absorb water is greatly reduced thereby vastly increasing the durability of the product. Accoya refers to the Softwood (Radiata sourced from New Zealand) that has undergone the process, a hardwood version Accoya Alder (as the name implies from the timber Alder) is also available. For more information please see Accoya.

Air Dried
Refers to the method of drying out timber naturally using the circulation of air. The pieces of timber to be dried are stacked on top of each other, separated by lathes or sticks to allow the air to circulate. This method of drying takes considerable time. Also known as In Stick.

Angle Rafter
Another name for a Hip Rafter

Annual Rings or Annular Rings
The concentric rings of wood fibre added annually as the tree grows. The wood fibre is made up of alternating rings, the darker rings being formed during the summer and the lighter rings during the winter. Also known as Growth Rings or Tree Rings, the Annual Rings can be used to determine the age of the tree, this is known as Dendrochronology.

Annual rings are added annually as the tree grows

Applique
Ornamentation planted on, instead of being worked on, in the solid.

Apron
An ornamentation on the middle rail of a door. It is usually planted on, but may be moulded/carved in the solid.

Apron Rail
The middle, or lock rail of a door, with raised ornamentation.

Architrave
The ornamental mouldings mitred round a door or window frame. The Architraves cover the joint between the plaster and wood framings.

Arris
The corner where two plane surfaces meet, this is generally removed either with sandpaper or by way of a moulding on finished Joinery.

Auger
A long twist bit turned with the hands, usually by means of a handle.

Awl
A hand tool for piercing small holes, normally as a starter hole for screws or nails. Also known as a Bradawl or Sprig Bit

A hinge with large flaps for screwing onto the face of a door and framing.

Balanced Sashes
The vertically sliding sashes in a sash and frame window.

Balk or Baulk
Any overly large sections of rough-sawn timber.

Balustrade
A row of Balusters / Bannisters with a base and handrail forming a protective enclosure.

Balusters or Bannister
The small vertical timbers supporting the handrail to stairs.

Band and Gudgeon hinges
Sometimes referred to as Hook and Band hinges or Hook and Eye, these are heavy duty hinges usually found on wooden gates and garage doors. They are in two pieces, the hinges being the band and the gudgeon or hook being the pivot which the hinge swings on. Band and Gudgeon hinges come in two different types, cranked (pictured below) and straight; the cranked version being used when it is required to keep doors of gates flush with the face of the frame or posts.

Barefaced Tenon
A Tenon with only one side shouldered.

Barge boards
The inclined timbers on the gable of a building, used to cover the ends of the roof timbers when they project over the face of the wall. Sometimes referred to as Verge Boards or Gable Boards.

Bark Pocket
A well defined opening containing bark between the annual rings of a tree, which develops as the tree is growing.

Base Mould
An alternative name used for a Skirting Board.

Battening
Narrow timbers fixed to a wall for wallboards, matchboarding, Skirting Board etc to be fixed to. Also known as Grounds.

Batter
Inclined from the vertical.

Bay Window (pictured right)
A window projecting over the face of the wall and continued from the ground.

Bead
A round moulding with a quirk, used to remove the sharp arris, and to break the joint between boards. When several beads are placed together, they are called Reeds. If the bead lies below the surface, it is referred to as a Sunk Bead. 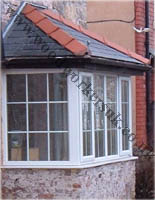 An example of a bay window

Bench Hook
Used for holding and steadying small stuff while being cut.

Bind
The term applied to to any hung frame, that fits too tightly on to the stop or rebate and so prevents easy closing. Hinge Bound.

Birds Mouth
A V cut or fork in the end of a piece of timber, so that it sits astride the corner of another piece.

Blind Mortice
A Mortice for a stub tenon.

Blockboard
An engineered board that comprises softwood blocks glued together and sandwiched between two veneers. Normally only suitable for interior work as the glue used to bond the blocks together and veneer upon them is not normally an exterior glue.

Block Plane
A small plane that can easily be used with one hand, useful for fitting mitres etc.

Board
Converted timber of small size, but very wide relative to the thickness.

Box Tenon
A tenon in the form of a rectangle for corner posts. For more information on the Box Tenon, please see our previous post on this and other woodworking angle joints.

Bow (pictured right)
A deviation/curvature in the flat of the timber from one end to the other, eg. if the timber was lying on a flat surface, then the centre would be slightly lifted.

Brace
A member of a framed structure crossing a space diagonally, and able to resist either compression or tension. Also a cranked hand-drill for boring.

Bradawl
A hand tool for piercing small holes, normally as a starter hole for screws or nails. Also known as a Awl or Sprig Bit

Breaking Joint
Arranging the consecutive heading joints in floor boards and matchboarding so they will rest on different joists or studs.

Bridle Joint
A reverse joint to the Stub Mortice and Tenon joint. For more information on Bridle Joints, please see our previous blog post on these and other woodworking angle joints.

British Woodworking Federation
Also known as the BWF. They are a trade organisation for the Woodworking and manufacturing Joinery industry in the UK. To become members you have to be vetted before you are accepted in and then you have to follow their code of conduct – you can read a bit more about their vetting of new members here or go to the BWF website.

Bullnose
A step having the end shaped to a quarter circle.

Burr (Pictured right)
A tree growth in which the grain has grown in a deformed manner, usually found round a wound or deformed bud. The burrs produce highly decorative, yet hard to work wood, which are used in veneers, turning, etc.

Butt Hinge
Hinges that are intended to be sunk into the edge of a door or casement.

Butt Joint
Two pieces of timber jointed together with a square joint.

Button
A small piece of wood secured by one screw so that it is free to revolve. Used to secure one piece of framing to another and tabletops/counter tops to the carcasses. Buttoned joints.

If you have any woodworking terms to add, then please use the comments box below and we shall then add them.