Welcome to the next installment of our fantastic look at all things wooden. This time, we’ll help you to learn lots of interesting things about Skeleton Steps, Spars and Spurs as we look at the most exciting letter yet, S; so much so, you’ll be able to impress all your friends and family with your S-related knowledge. Read on for more exciting S-related terms…I’ve certainly learnt something new this time, I hope you will too!
As always, if you have any comments or think we should add something, please get in touch.

Saddle Back (Right)
Applied to cappings or rails that are weathered both ways.

Saddle Cramp
A cramp with long shoes for curved or projecting surfaces.

Sapwood
The outer portion of the annual rings, through which the sap flows up and down. 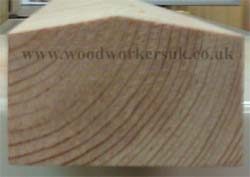 Sash
The separate smaller frames of a window carrying the glass.

Sash Clamps or Sash Cramps (right)
Clamps used in the process of cramping up doors, windows etc whilst gluing up. The clamp has a flat bar with a fixed jaw that adjusts with a screw action and a sliding jaw that is locked in the desired positioned along the bar to suit the size of job being undertaken.

Sash Frame
A frame carrying one or more sashes

Sash Lines or Sash Cord
The cords attached to the weights for a sliding (vertically) sash window.

Scarf
A joint for connecting timbers lengthways without increasing the cross section.

Scraper (Right)
A thin blade of steel used to scrape the surface of timber after planing. It is used to remove plane marks prior to glass/sand papering.

Scribing
The act of shaping timber to fit an irregular surface. 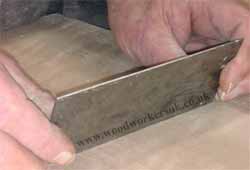 Scutcheon
An alternative name for an Escutcheon.

Seasoning
The drying or removing of the sap in felled trees.

Second Seasoning
Drying of timber that has been cut into smaller sections or framework in preparation for fitting and wedging up.

Secret Nailing
Inserting nails in such a position that the nail holes are not seen.

Section
A drawing representing the internal arrangements of an object. It is obtained by cutting the object by an imaginary plane and then depicting the surface formed by the intersection of the plane with the object.

Set
The projections of saw teeth to alternate sides for the purpose of increasing the thickness of the saw cut, so that the blade will work freely.

Setting Out
Preparing full size drawings on Rods, and transferring the dimensions to the timber prior to construction.

Shake
A split in the annual rings of timber.

Shipping Marks
Identification marks stenciled or stamped onto the ends of timber. The marks which are stamped on by the exporting saw mill, denote it’s origin and the quality of the timber in question. For an online dictionary of shipping marks please visit the Shipping marks search engine.

Shoe
A socket into which the foot of rafters or posts sit.

Shooting
The act of straightening the edge of a board with a (shooting) plane.

Shore
A heavy timber used to support a wall or similar.

Shoulder
The end of a piece of timber where it butts on to another piece, as in the shoulder of a tenon.

Shuttering
The boards or forms used in the moulding of concrete. Also known as Formwork.

Shutters
Protections for windows. They may be hung like doors, balanced like sliding sashes or built up of laths to wind round a roller.

Shutting Stile
The stile of a door that carries the handles and lock, opposite the Hanging Stile.

Silver Grain
The grain obtained by cutting timber such as oak etc. along the medullary rays.

Single Floor
A simple floor consisting of only Common Joists.

Sinking
A recess or a part sunk below the surrounding surface.

Skeleton Framing
The carcasss, before the addition of the coverings or finishings.

Skeleton Steps
Treads without risers in a flight of stairs.

Skew
Out of square or in an oblique position.

Skew Fillet
A tilting fillet down the slope of a roof to raise the slates where they join the gable.

Skew Nailing
Nails driven in at an angle to the surface to give greater security.

Skirting
A moulded board covering the join between wall and floor. Also known as a Moulded Base Board.

Skylight
A glazed frame running parallel with the roof surface.

Slamming Strip
The edging strip to the shutting stile of a flush door. Also a planted stop on a door casing.

Sliding door
A door that slides in grooves, pulleys or track.

Slip Feather
A tongue cut diagonally across the grain.

Socket
The eye of a Dovetail joint.

Soffit
The horizontal lining at the head of an opening or around a roof below and to one side of the Facia Board.

Softwood
Softwood is the timber from fast growing evergreen trees. The term softwood is no indication of how soft or hard the timber is – some softwoods are harder than hardwood! Western Red Cedar for example has many qualities of hardwood (and is often used externally as cladding due to it’s durability) but is a softwood. See also Hardwood for more.

Solid Moulding
A moulding in the solid i.e. not planted on.

Spalted Timber
The patterning caused by the ingress of water and fungi as timber starts to decay. The best known
example being spalted beech (shown above right).

Span
The distance between the supports for a beam, arch or truss.

Spandrel
The triangular framing or boarding under a flight of stairs. 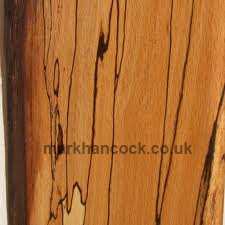 Spelch
Spelch is where surface fractures develop as a mass of smaller minute fractures. Common on end grain and caused where the timber has lost it’s internal cohesion and integrity.

Spindle (Right)
A moulding machine in which the cutters are carried by a vertical spindle, above the table top. Also a steel bar that protrudes through a door that carries the handles. 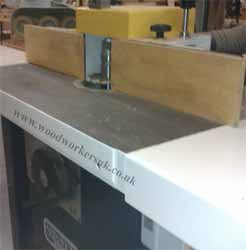 Splayed Joint
A joint in which there is a bevelled edge so the timbers overlap.

Stanley 55
A combination plane, described as a ‘planing mill within itself’ (to quote the instructions). The 55 within it’s name relates to how many cutters are supplied (it’s almost like a Swiss army knife of the plane world) and the plane itself is a rebate plane, plow plane, fillester and match plane, dado plane – infact anything you set it up to be. The picture (right) shows my Grandads (now my own) original Stanley 55, which he obtained somewhere around the 1920’s. 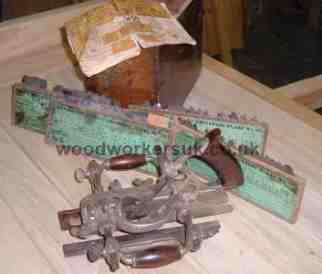 Storey Frame
A door frame with the addition of a window frame above the head of the door frame. Similar to a Fanlight but usually rectangular.

Square (Right)
A tool for marking out and testing right angles.

Stanchion
Sometimes applied to the Mullions of a window.

Star Shake
Radiating shakes (splits) in the sapwood or a log.

Staves
Narrow boards used to build up a curved surface. 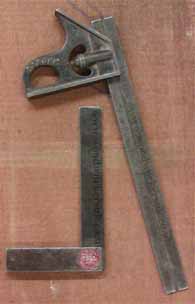 Sticking
The act of forming mouldings with a plane or machine. Also building up a stack of wood for seasoning , with skids or sticks separating the layers.

Stiles
The vertical members on the outer edges of a piece of framing.

Stop
The termination to a solid moulding.

Stops
The projections on a door casing, lining or frame on which a door closes against.

Storey Rod
A long strip of wood on which the heights of steps are spaced between two floors, used in the marking out process.

Straight Edge
A strip of wood (or anything else) with parallel straight edges, used for testing.

Straight Grain
Timber with straight fibres. The most suitable timber for constructional work.

Straining Beam
A horizontal timber between the heads of the queen posts in a roof truss.

Straining Sill
The horizontal timber between the feet of queen posts in a roof truss.

Striking
The removal of a centre or other temporary timbers when work is completed.

Striking Plate
The plate screwed to the rebate against which the bolt of a mortice lock strikes as the door closes.

Strings
The sloping supports carrying the treads of stairs. The strings can be classed as: bracketed, close, cut, outside, wreathed or wall.

Strutting (Right)
Short timbers placed between joists to prevent them from canting or buckling.Shown right is Herringbone strutting.

Stub Tenon
A short tenon that does not pass through the stuff.

Studs or Studding
The rough vertical timbers used when framing for a partition or hollow wall. 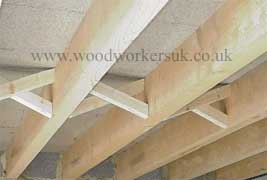 Stuff
A term for converted timber.

Stump Tenon
A tenon that increases in thickness at the root, for strength.

Sunk Panel
A panel sunk below the surrounding surface.

Swing Door
A door without stops and opening in both directions, most commonly found as a door between a restaurant and the kitchen.