Continuing on from part one of our Carpentry and Joinery terms, this post sees us looking at C-E, from Calf to EX and everything in between!

Calf
The wedged shaped part of a Scarfed Joint.

Camber
The rising at the centre of a horizontal structural member to counteract sagging.

Cabinet Maker
A Cabinet Maker is someone who specialises in the making of shelving, furniture and cabinets.

Cable Moulding
A cylindrical moulding carved to imitate a rope.

Cap
A planted piece on the top of a post for weathering or ornamentation.

Capillary Action
Sometimes referred to as Capillary Attraction is the phenomenon whereby moisture can travel against the force of gravity in fine spaces or between two surfaces which are close together. The smaller the space, the greater the capillary attraction.

Capillary Groove
A groove which can be found on the underside of window/door cills and weather mouldings; the groove acts as a break to stop the capillary action of moisture from reaching the brickwork. Also known as a Drip or Drip Groove.

Capping
A long length, serving as a cap for gates and framing.

Carcass (Right)
The frame or main parts of anything, before it is completed with coverings (eg. T&G boarding or paneling).

Carpenter
Generally speaking, Carpenters are involved in work that does not need finishing, such as the erecting of structures (i.e. roofing, shuttering etc.). An old phrase used to differentiate between a Carpenter and Joiner is ‘A Carpenter uses nails whilst a Joiner uses screws’; however, the differences have become somewhat blurred these days.

Case Hardened
A condition of stress in the adjacent layers of timber due to incorrect seasoning, causing the the wood to warp when further machined.

Casement
A glazed sash hung by hinges or pivots. Also, a hollow moulding less than half a circle.

Centre
The mould or timber frame used as a support when turning an arch.

Centering
The temporary timbering used for supporting the component parts of an arch whilst building.

Chain Moulding
A carved moulding imitating the links of a chain.

Chair Rail
A Dado rail. A horizontal moulding fixed to a wall to prevent the chair backs from damaging the decoration.

Chamfer (Right)
A corner bevelled so that the Arris is removed equally on each face of the material. When it is unequal, it is termed a Bevel.

Chase Mortice
A mortice with a chase, so that the stub tenon can be slid into position sideways instead of lengthways.

An example of a chamfer

Cill
The horizontal member at the bottom of a frame. Also known as a Sill.

Clearance
A space between two surfaces to prevent contact, as between the edge of a door and the frame.

Clout Nail
A short nail with a large flat head, for fixing cords, felt and plasterboard.

Coach Screw (right)
A large screw with a square or hexagonal head that is driven in using a spanner.

Coarse Grain
Applied to timber with wide annual rings due to rapid growth.

Common Rafter
The main rafters in a roof carrying the slates or tiles and running from the Wall Plate to the Ridge. Also known as Spars.

Compass Plane
A smoothing plane for circular work (below right). The sole of the plane is adjustable by means of of the screw for either concave or convex surfaces.

Condensation Groove
A groove to collect the condensation on the inside of sashes. A Weep Hole allows the moisture to escape to the outside.

Core
The loose waste timber from a mortice. The interior of plywood or any solid wood forming a base for veneering.

Corpse Gate
A covered entrance to a churchyard (Right). More commonly known as a Lych Gate.

Countersink
To prepare a screw hole so that the head of the screw is flush with the surface of the material. 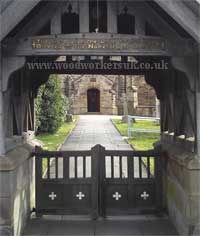 A Lych or Corpse gate

Couple
A pair of Rafters.

Close Couple
Rafters nailed together at the top and tied at the feet, or by a collar beam up the roof.

Cramp
A tool for squeezing two or more pieces of material together.

Cramping-up
Tightening-up the joints of framing, etc., by means of cramps.

Crenellated
Mouldings that are notched or indented in the form of battlements.

Cross Garnet
A strap hinge (Right) shaped like a letter T and more often referred to as a T or Tee Hinge.

A Cross garnet or Tee-hinge

Cross Grain
Also known as Diagonal Grain or Oblique Grain, Cross Grain is the term applied to converted wood in which the fibres do not run parallel to the axis of the timber.

Crown
The highest point of an arch.

Cup Shake
A shake in timber caused by the separation of the Annual Rings.

Dado
The lower part of a wall from the skirting to the Dado Rail.

Dado Rail
A horizontal moulding fixed to a wall to prevent the chair backs from damaging the decoration. Also known as a Chair Rail.

Dais
A platform or raised floor.

Datum Line.
The line on a building site from which all heights are measured.

Dead Knot(Right)
A knot that isn’t firmly joined to the surrounding wood. A decayed knot in timber.

Dead Load
The forces acting upon a structure due to gravitation. The weights of the different materials.

Dead Lock
A lock operated by a key only.

Deflection
The amount that a beam is bent out of the straight, due to the load

Dentils (Below)
Projections on the face of a moulding formed by removing alternate parts of the fillet on the moulding.

Doatiness
A disease in timber giving a spotted, speckled apperance to the timber.

Dog-legged
Stairs consisting of two or more flights, in which the returns are made from the same Newel.

Dog’s Tooth
An ornamental moulding with carved projections in the form of small pyramids.

Door Posts
An alternate name for the Jambs of a solid door frame.

Door Frame
A solid frame for a door.

Door Sill (right)
A horizontal member connecting the foot of the Jambs of a door frame.The Capillary Groove (A) is the smaller of the two groove and this side of the Sill protrudes to the exterior. The other groove (B) is the Mortar Groove.

Section through a typical door cill

Door Stop
The edge of the rebate against which a door closes.

Dormer (Right)
A window in a sloping roof, having vertical casements.

Double Hung Sash
A sash and frame window in which both pairs of sashes are hung. 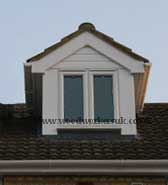 Dovetailed Joint
A joint in which the pieces are end to end and forming an angle. The Dovetailed joint is made by forming pins in the shape of a dove’s tail.

Draught or Draw
The space which is closed up in Draw-boring.

Draw-boring
The act of tightening a joint at the shoulder by means of a pin. The hole in the cheeks of the mortice is a little in advance of that in the tenon.

Draw Knife
A cutting tool with two handles (below), used for cutting large chamfers. The timber to be worked is secured in the vice and the knife if pulled towards the user with the bevel edge facing down and held into the timber.

Dressed
Stuff that is planed up.

Druxiness
A disease in timber, caused by a wound in the cambium layer being attacked by fungus.

Dry Rot
Decay in timber caused by a fungoid growth. It is usually the result of a moist, stagnant atmosphere, such as can be found under badly ventilated floors.

Durability
Refers to the durability of timber, which is how long a sample of timber is expected to last in it’s untreated form. There are five durability classes which range from ‘non-durable’ upto ‘very durable. You can read more in our timber durability guide here.

Dwarf Door
A door which is too low for ordinary traffic without stooping, usually less than five foot high.

Eaves
The bottom edge of a sloping roof where the water is collected in the gutters.

Edgings
The strips on the edges of flush doors to secure and cover the edges of the plywood. They are also called Bandings, Clashings, Margins, Slamming Strips etc.

Elevation
A drawing showing the front view of an object.

Emboss
To form designs in raised work. The ornamentation is prominent.

End Grain
The exposed end of a piece of timber after it has been cross cut.

End Matched
Boarding tongue and grooved on the ends.

Engineered Timber
A generic term covering a wide variety of timber based products that have been engineered to enhance performance. Includes boards such as: Plywood, MDF, Plywood, Blockboard, Chipboard and Gluelam beams etc.

EU Timber Regulations 2013
New timber regulations brought in by the European Union in March 2013. The regulations prohibit the use of ‘Illegally harvested timber or products derived from such timber’ and those of us who buy and sell timber within the EU market have to meet certain legal obligations. Also known as the EUTR, you can read a bit more about it here.

Escutcheon (Right)
A metal plate fixed around a keyhole.

Espagnolette Bolt
A bolt that fastens in three places in one operation. It can be used on French windows and fastens the window at the bottom, top and at one or more intermediate positions.

Eyebrow (Below)
An upper window over which the eaves are raised in the form of a flat segment.

EX
Meaning ‘out of’ or ‘from’. For example, if you were having a pair of garage doors manufactured that were described as EX 50mm thick, then generally they would finish at approx. 45mm thick once the timber had been planed up. Derives from Latin. 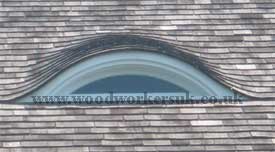