Social media for a joinery business

We’ve recently started to use social media at work; Twitter and Facebook; I must say to begin with I was sceptical of its uses to us and how it could be used to help our business, especially considering all the hype that surrounds it. At times, it can seem just one more thing to have to do, that adds to an ever increasing list of things needing time and attention!

Being disappointed to say the least with the response we received, we mentioned on our Facebook page and Twitter account several times that we were looking to take somebody on and thought no more about it, thinking that was that and we would have to hope somebody turned up from the job centre advert. Out of the blue, one of our Twitter followers, Denbigh Army Surplus, gave us a phone call asking whether we were still looking for someone, as he knew of somebody looking for a job. 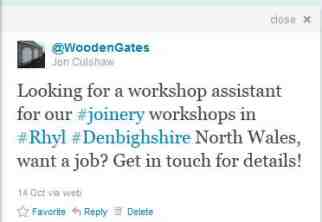 With the introduction made, the person in question, James, gave us a call, popped in for an interview and got the job and the rest, as they say, is history! He’s been with us since mid-November and seems to be enjoying the job and is learning all the time.

As well as acquiring a new employee in a roundabout way through social media, we’ve also spoken (or tweeted!) to a few people that have turned into customers of ours. So I think one benefit of using social media is getting over your personality to people and also being approachable, which goes someway to reassuring potential customers that you’re not some fly-by-night company that has sprung up just to take your money in return for a sub-standard product; after all, it would be quite easy if you’ve had a bad experience of an online company who then refuses to answer your query/complaint to start sending out tweets etc. detailing your experiences for all the world to read about.

While I’ve still got a long way to go before being totally convinced that social media is for us as a business, I’ve got to say that I’m slowly coming around to the idea of its uses and one thing is for sure – social media will not be going away and will, in all likelyhood, play a bigger part in the future of the internet.

If you use social media and want to get in touch then you can find us on Facebook and Twitter. Come and say hello!